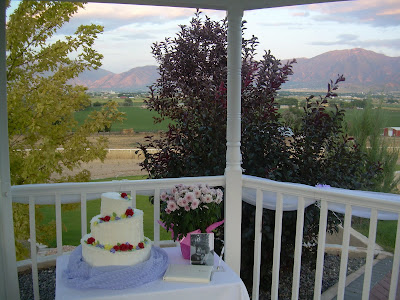 I did it. It's done. And it looked good! It was such a relief to finish. I tried hard not to stress out but I couldn't help it. Let me take you through the creation of my brother's wedding cake. . .
.
A few days before the wedding, I pinned down my brother and almost-sister-in-law to ask some questions, trying to nail down the last couple of details: 3 slanted layers, maybe a topper, maybe not.
.
I finished making flowers, adding purple to the yellow, red and blue: 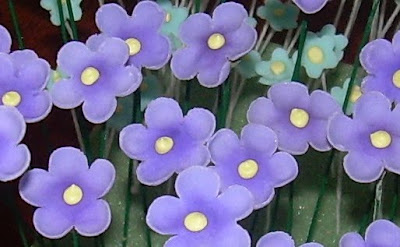 I also made some leaves to act as filler just in case my sister was right when she said, "I don't think you have enough flowers.": 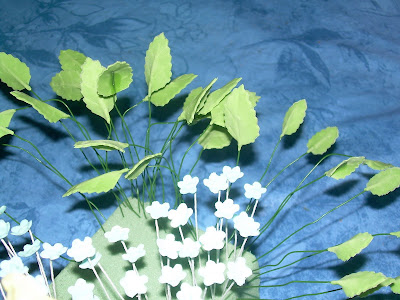 I then got the styrofoam discs for the bottom two layers and baked the top layer. The bride requested chocolate cake, so I looked up recipes and made Martha Stewart's Chocolate Cake. It's the first cake from scratch that has worked for me! And it was an easy recipe too. Next, I made my husband cut the styrofoam {I can't stand that stuff. The sound it makes when it rubs against anything. . .ughhhh! Gives me chills and makes my teeth ache.} 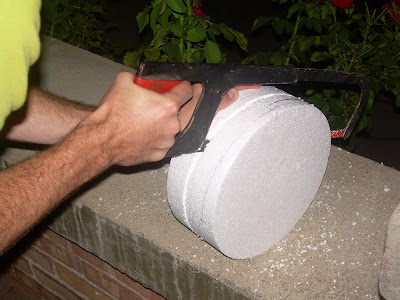 It made the most horrifying noise. I could barely stay long enough to take a picture. So, thanks again, Grant! The wedding was going to be Monday evening, so I decided to put the cake together in the morning, not really the smartest idea, but, thankfully it worked. Well, that morning came and I was trying hard not to freak out. My mind was racing through all of the worst-case scenarios it could think of: too few flowers, melting icing, cake layers sliding off of each other, crumbs in the icing, etc., etc. I was so nervous that I kept breaking flowers, which made me more flustered, leading to more dead flowers. . .anyway, my sister helped me by putting the finishing touches on the purple flowers. I moved on to cutting the cake top. My brother told me when I got there that they didn't have a topper. Now the pressure to have a level top layer was gone. So I cut the cake and put the layers together: 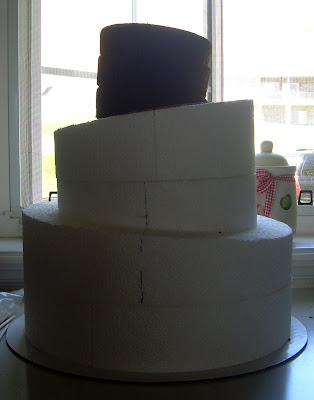 Then it was time to frost. I made the Creamy White frosting from my Homemade Oreo post. I tripled it and had just enough. Lucky for me, they {the bride and groom} didn't care if the frosting was smooth or not, so I didn't even try and I actually like what I did better: 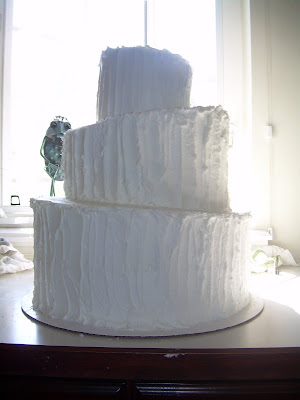 For the cake layer, I preped it by freezing it for a few minutes and then doing a thin 'crumb layer' and freezing that again, before doing the final icing layer. So there were no black flecks to be found. Finally, the moment of truth! Time for the flowers: 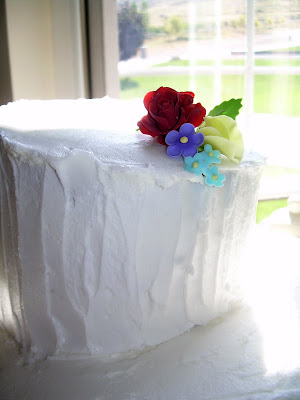 I started at the top and I have to say that once I put those few on top all of the anxiety went away. My sister and I then finished putting the flowers on. We didn't go all of the way round the cake, but we could have {there were tons of flowers leftover} and looking back, we maybe should have. We were running short on time, I think it was past 5pm and the wedding was scheduled for 6. It still turned out fabulous: 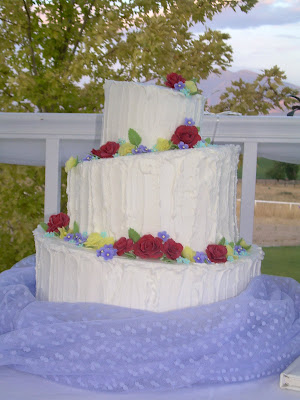 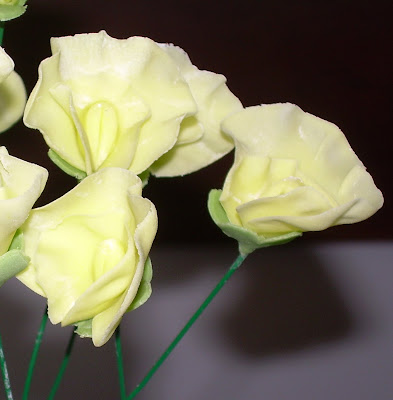 I've been too busy the past couple of weeks to make any flowers. Yesterday, I finally made some headway. Behold, the sweet peas: 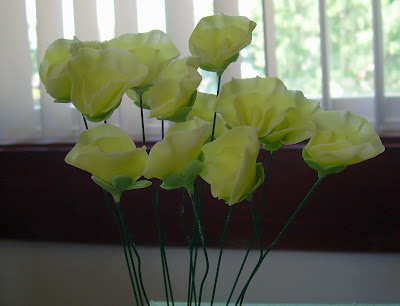 Once I got the hang of them, they were easier than the roses and faster too. I really need to get cracking though. I have less than a week to finish. 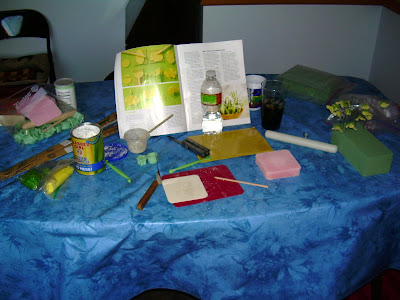 I'm planning on doing one more style of flower, in purple fondant. And then I'll just need to make sure I made enough of each. . .
Posted by r at 12:18 PM No comments: